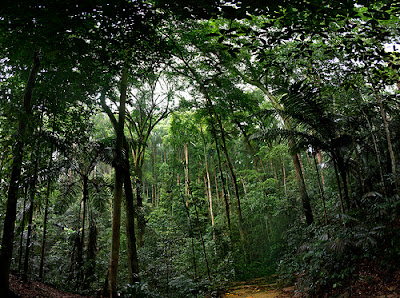 Forest Degradation. Selangor which had experienced a loss of up to 10% of its forests in the 22 years between 1990 and 2012 continues to face forest degradation, a study by UKM scientists found.

The deforestation was found to be due to economic and development factors including increased farming and urbanisation arising from a growing population.

Speaking to UKM News Portal after a seminar on Space Sciences here, Prof Sharifah Mastura said knowledge on deforestation and its driving forces in Selangor is very important as it provides the basis for the calculation of the total amount of carbon stock remaining above ground.

Carbon stock is the supply of carbon, especially carbon dioxide, kept in trees and other plants.
She said the study provided an insight into appropriate measures that could be taken to increase the area of trees to reduce the release of carbon dioxide emission into the atmosphere.
Photographs taken by satellites and land use maps from the Ministry of Agriculture and Agrobased Industry showed the deforestation in Selangor had complex causes.

She said the reduction in forest cover in the state must be understood because for decades perceptions and controversies of deforestation had persisted in public debate.

Prof Sharifah Mastura said the degradation was due to economic, institutional and cultural practicesand policywith just over half related to population dynamics and the rest due to agriculture, economic factors, public policy and road networks.
She gave the following data: Overall forest loss in the 22 years was 2% from dipterocarp forestsmade up of the largest trees and 8.6% from peat swamp forests.

While the stastistics may not appear to be alarming, detailed analysis using the Normalised Difference Vegetation Index (NDVI) showed the quality of the forest had degraded widely.

Most researchers agree that forest cover is an important and critical feature as it plays a major role in maintaining the regional hydro-climate-ecological balance as well as life sustainability and well being on earth.
In Malaysia forest and grassland conversion was fourth in the source of carbon dioxide emission in the country, contributing 14%. Continuous conversion of forest to other land use is responsible in the releasing of carbon dioxide to the atmosphere.

Global annual data on emission of carbon dioxide from deforestation amounted to 25% of the total carbon emission.

Prof Sharifah Mastura urged more case studies be done on the deforestation process – not only in Selangor, but all over the country. Only then can the regional level be considered.
She said case study results from Selangor contain valuable ground truth that helps to build up the bigger picture of the actual deforestation issue in Malaysia.

Any policy aimed at sustaining the forest in Selangor would be futile if underlying causes of deforestation are not properly known or poorly understood.

Many countries have policies favouring economic growth over forest protection. Consequently, these countries have to bear long term downstream and irreversible impacts of environmental degradation among which is an unsustainable forest resource.

Forest Degradation Ensuring carbon stock in the soil and vegetation above ground, provides the critical information required for policy makers to access the feasibility of projects based on land acquisition, Prof Sharifah Mastura said.